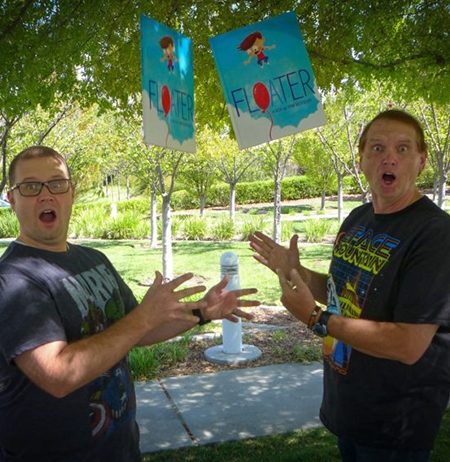 Rick and Ryan Goldsberry are a father-son dynamic duo and the writer-illustrator team behind the children’s picture book Floater.

Most of Rick’s adventures begin with the words “what if.” Like . . . “What if one of the grandkids got a hold of a Marks-A-Lot permanent marker and took it into the living room?” In between his adventures, he writes children’s books with his son Ryan, the illustrator. Floater is their first book, and Rick sees no reason why the trend should stop there, so long as he can keep wearing t-shirts.

During the day Ryan is a mild-mannered animator for Disney Interactive, but at night everything changes: he dons a cape and skintight suit and becomes a super-powered illustrator! He also has a wife and five kids . . . which technically makes him insane. Ryan’s goal is to make books that parents won’t mind reading to their kids and that kids will want to read over and over again.

Books by Rick and Ryan Goldsberry 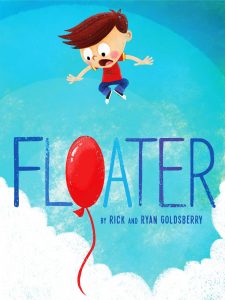 Rick Goldsberry, the author behind the inventive children’s picture book Floater, has visited many schools in the California Bay area with his fun and interactive K-3 assembly titled “What If . . . ?” During his 30-40 minute presentation, he will read his entire book, Floater, with the kids and stop periodically to discuss how he wrote the book and came up with the idea. By using the simple question “what if . . . ?” he will explore the question behind Floater, “What if you woke up in the morning and you were floating?” and create an original “what if . . . ?” story with the students. During the assembly, he will also use examples to show how many people use this simple method to invent stories with the goal of helping students realize that they too can easily come up with their own ideas by asking “what if . . . ?”

For out-of-area visits, the price is $600 for a single assembly. To make travel cost-effective, we offer special discounts when you refer other schools that book on the same day in your area: